Cruising the Waves of Japanâs Culture by Lesley Downer 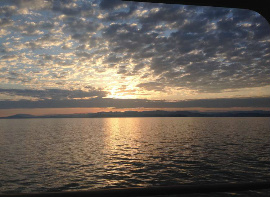 This article appeared in the Japan Times on May 16, 2015. Scott Gilman, Co-Founder of JapanQuest Journeys, sailed on The World from Otaru to Tokyo.

As the great ship surges into Tokyo Bay Iâm on the prow, hair streaming in the wind, like Kate Winslet in âTitanic.â Wooded crags come into view, dotted with buildings and the odd factory chimney. The buildings are modern, not wooden houses, but the crags are still much the same as Commodore Matthew Perry must have seen when he sailed with his âBlack Shipsâ toward what was then Edo Bay in 1853.

Three hours later Iâm sailing under Rainbow Bridge and glimpsing the high rises of Tokyo. As the ship sweeps in to dock at Harumi Pier, sirens blast and a brass band on the quay strikes up a melody to greet us.

Iâd never have guessed how thrilling sea travel could be or that Japan would look so different when seen from the ocean. Iâd imagined messing around on the docks but Iâd never pictured myself standing on the 12th deck, looking down on the crew as they hoist the ropes into place.

Iâve been invited to join The World, an enormous vessel, for a few weeks as it travels along the Pacific coast of Japan, to give lectures to the passengers on the country and its history, which Iâve been writing about, both fiction and nonfiction, for years. When I arrived I had no idea what I was letting myself in for. I was certainly not expecting a floating five-star luxury apartment block, 12 stories high, with an atrium lobby with chandeliers, a grand piano and uniformed staff, six restaurants, a library, two pools and a gym. The passengers, who are referred to as âresidents,â own their apartments and fly in and out as the ship sails wherever in the world they all decide they want to go. They have just been to Siberia and the Sea of Okhotsk and, now, itâs the turn of Japan.

I join the ship at Otaru, an hourâs drive from Sapporo, and we sail through the Tsugaru Straits with the blue hills of Honshu and Hokkaido in the distance. We pass Hakodate and enter the Pacific, swinging so far out to sea that the coast is barely a twinkle on the horizon. After 2Â½ days at sea, we turn toward land. We round Cape Nojima at the tip of the Boso Peninsula and enter the channel at Uraga, Kanagawa Prefecture, where Perry first docked. The waters of Tokyo Bay are crowded with ships and boats, just as they must have been in Perryâs time.

From Harumi, we take a bus through the area where the 2020 Olympic Village is under construction. Iâve been asked to lead a tour of the East Gardens of the Imperial Palace, where Edo Castle, the shogunâs magnificent home, once stood. For 10 years Iâve been absorbed in writing novels based around the Ooku, the womenâs palace where 3,000 women lived and the only man who could enter was the shogun. Iâve walked its shadowy corridors, grand painted chambers and splendid audience halls â in my imagination, that is.

Iâve been to the East Gardens many times, I know thereâs nothing much of Edo Castle left, but itâs still a shock to see the vast expanse of lawn where the womenâs palace once stood. As we walk I try and conjure up its white walls, dove-gray roofs and the life of luxury and ritual, jealousy and infighting, that went on there. Itâs extraordinary to tread the very paths that the daimyo trod when they came to pay homage to the shogun, and to see the walls, moats and guardhouses that Townsend Harris, the first American consul, saw when he visited in 1858.

After three short days in Tokyo we raise anchor with a great hooting of sirens. The immense ship glides away from her berth, to reposition a little further up the bay in Yokohama.

Yokohama is a revelation. I used to go by train and always thought it rather drab. But its sea face is beautiful. I stand on the balcony of my small cabin with the water rushing by at my feet as we swing toward Minato Mirai, (Harbor of the Future), with its turreted Landmark Tower, ferris wheel and the great curve of the Intercontinental Hotel soaring over the rows of carefully restored old brick warehouses that the early travelers would have seen as they sailed in to dock. Here thereâs no need to take a bus. I walk straight off the ship into the city.

Itâs only a few steps to the road that was laid out in 1858 when Yokohama was chosen as the first settlement for Western residents. The Yokohama Archive of History is housed in a modest building here. Itâs a treasure trove of materials on Perry and the early settlers. Walkways lead along the waterfront, including one right alongside the ship. I mingle with the admiring crowds taking photographs of our majestic vessel, secretly proud that now at least Iâm a voyager, not a spectator.

In the evening, neon lights up the waterfront in a blaze of color. Iâm on the top deck to watch as we raise anchor and move grandly out to sea. Weâre to sail through the night and arrive the following morning in Nagoya.

Nagoyaâs sea face is distinctly less romantic. My cabin looks out onto a car park. I take the chance to visit Nagoya Castle, currently being restored to its original glory. Thereâs a wonderful smell of new wood. For the first time since the castle was destroyed in the air raids of 1945 we can really appreciate the gold walls painted with tigers and exotic birds, which in Tokugawa days would have shone bright in the candle light.

Two days later we are on our way to Wakayama Prefectureâs Shingu, where a delegation dressed as Edo Period ladies is on the quay to welcome us. For the small town of Shingu, itâs a major event for an enormous ocean-going vessel like ours to drop in. Small though it is, itâs the gateway to the legendary Kumano shrines, some of the most ancient and venerated Shinto pilgrimage sites.

My fellow lecturers and I take a bus along the coast to Nachi, then another that winds up the mountain to the base of Daimon-zaka, a long stairway of rough stone steps that leads to the torii gate of Kumano Nachi Taisha. Set into the mountainside is the shrine itself, a cluster of thatched red-painted buildings, with a museum and an atmospheric old temple of faded wood. We climb the three-story pagoda and clamber down through the trees to Nachi Falls. Itâs wonderful to be walking through the empty wooded mountains, hearing the trickle of water and the shrill of cicadas echoing up the valley.

That evening we sail for Kobe in Hyogo Prefecture. Iâm up early to watch the sun rise over the ocean and the distant coast. Kobe, too, presents a different face to the sea. The quay is dominated by the Kobe Meriken Park Oriental Hotel, which curves, gleaming white, like the prow of a ship with tiered balconies like decks â the mirror image of our own ship. One of the buildings sports an elegant roof curving like fishing nets. By night neon glitters, the nets light up and the Ferris wheel turns. Itâs a spectacular sight.

Before I leave the ship I visit the bridge. Iâm amazed at how computerized the controls are. But there are still low tech windows in the floor through which the captain can look down and check precisely how close we are as we edge toward the dock.

From Kobe the great ship will sail on to Hiroshima then through the Inland Sea to South Korea and Shanghai â on and on forever, wherever the residents choose to go.

But for me itâs the end of my journey. Long before daybreak Iâm on the quay with the vast ship looming above me, waiting for a taxi to take me to the airport. Itâs been an unforgettable way to see an entirely new side of Japan â from the sea, as early travelers saw it.

The main company that runs cruises out of Tokyo, Yokohama or Kobe is Princess Cruises: bit.ly/princesscruiseasia. They offer a variety of trips for between five and 18 days. Itâs best to find a cruise that stops long enough at each destination for leisurely exploration. Onshore trips for the passengers of The World were booked by JapanQuest Journeys: www.japanquestjourneys.com. Lesley Downer is a British writer, whose books include âThe Samuraiâs Daughterâ and âMadame Sadayakko.â Her next novel âWoman Behind the Screensâ will be published in May 2016.

The original article in the Japan Times can be found here.