Below the Surface by Prairie Stuart-Wolff 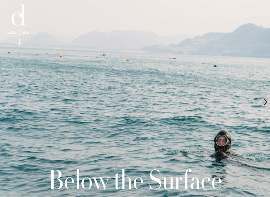 The freediving traditions of ama

Three days in a row, I call Sakamoto from inland — where the air is still and the sun is warm — seemingly perfect for a boat ride. But thrice in a row, he reports impossible waves. While winter seas are predictably rough and summer seas are even and calm, spring proves the seas are capricious. There are two routes to Minato, a small village where a community of ama (freedivers) still work. One route passes farmed fields carved from dense overgrowth, the other skirts along the edge of blue that stretches toward islands on the horizon. Whether through the mountains or along the sea, both routes are winding and long and converge at Minato.

The legend of ama tells of a small group of women whose life’s work was diving for pearl-bearing oysters while holding their breath. But for nearly 2,000 years, both men and women have been breath-hold diving with minimal equipment in the waters that surround Japan. They harvest the far less glamorous mollusks, echinoderms, and seaweed from the ocean floor.

This is the sixth in a continuing series of featured articles authored by Prairie Stuart-Wolff from her online publication Cultivated Days.