Enlightenment in a Zen Garden: From Canvas to Earth 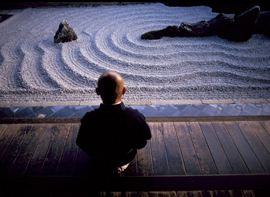 Enter one of Kyotoâs most divine Zen Buddhist temples as a Buddhist priest, born inside these very grounds, guides you around his picturesque home on a delicate voyage of tranquility and scenic artistry.Unbeknownst to the first-time visitor, youâre moments away from standing âinsideâ a Zen composition declared a national treasure of Japan.

Affixed to the temple wall just outside the templeâs karesansui dry rock garden, âCatching a Catfish with a Gourd,â by suiboku style painter Josetsu, depicts a man hunched over a river attempting to catch an evasive catfish with an equally slippery gourd. Your guide brings you deep into the scene, inspired by Zen koan (riddle) aficionado Ashikaga Yoshimochi. Attempting to prove the futile effort of realizing enlightenment through logical tactics, Yoshimochi presented the dilemma âhow does one catch a catfish with a gourd?â to 31 monks; the best of the Kyoto monasteries in the 15th century Muromachi Period at the time. Of the 31 poems written above the painting, not one could explain the koan, as the intended challenge is merely to provoke a state of awareness essential for Zen meditation.

To step into this particular templeâs pond garden is to immerse yourself inside the real-world manifestation of Josetsuâs famous painting. Like the feeling you had the first time you saw Dorothy arrive in the Land of Oz, the murky hues utilized on his paper canvas come to life exploding with color and invigorating the senses. Abounding in beauty, this masterfully tuned scene will leave you having reached your own enlightenment as you stroll through this precious, intimate heaven on Earth.