Experiencing the Thrill of a Sumo Stable 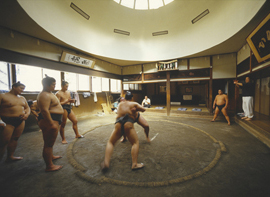 On the narrow back streets of the Ryogoku district of Tokyo, the heart of sumo wrestling in Japan, lie what are known as beya or training stables where sumo champions and aspiring champions alike hone their skills to compete in one of six annual tournaments with the hope of someday being crowned a Yokozuna or Grand Champion.

When not competing in the spotlight of the six annual tournaments held at the Ryogoku Kokugikan, the national sumo stadium in Ryogoku or at similar venues in Osaka, Nagoya and Fukuoka, sumo wrestlers are up at the crack of dawn practicing in their respective sumo beya.

Visiting a sumo beya is a cultural experience unlike anything you can imagine. Watching as sumo giants practice their skills within twenty feet of your eyes with the only sound emanating from the clash of these modern day gladiators is a thrill to behold. The strength and agility of the wrestlers will leave you in awe. As fascinating to watch is the personal interaction of the wrestlers on the training ground as their relationships are governed by an established hierarchy that is a reflection of centuries of Japanese tradition and culture.

Let JapanQuest Journeys introduce you to the world of sumo with a visit to a sumo beya with our sumo expert. Sumo beya are not open to the general public but can be accessed with our special relationships for several weeks immediately prior to the January, May and September tournaments in Tokyo.