New Year in Japan is Steeped in Spiritual and Cultural Traditions 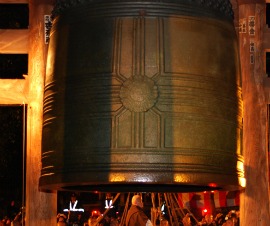 New Years is the most important holiday in Japan and is steeped in spiritual and cultural traditions that have existed for centuries. Japan was originally an agrarian society and New Years was a time for people to come together to pray for a bountiful harvest for the coming year. Even now, the Emperor will participate in a harvest related rite on New Year’s Day.

While the vast majority of Japanese families are no longer involved with agriculture, New Year celebrations in Japan continue to hearken back to the ways of the past. New Years is a time for families to gather together, to reflect on the past year and to pray for an auspicious coming year. While the New Year holiday retains an aura of solemnity, it is also an occasion to witness Japan at one of its most colorful times as women bedecked in their finest kimonos venture forth with their families to pay their first shrine or temple visit of the year. In addition, special and delicious foods rich in symbolism are enjoyed, such as toshi-koshi soba representing a long life and osechi ryori, a bento box like assortment of foods each of which symbolizes an auspicious event.

Unlike the West where New Year celebrations are limited to New Year’s Eve and New Year’s Day, the New Year period in Japan extends from New Year’s Eve through January 4th. A visit to Japan during New Years is a visit unlike any other time of year. You can not only see but can feel the connection to the past as you set forth during this period which in many ways is like entering a time warp.

Let JapanQuest Journeys expertly lead you on an unforgettable and compelling trip full of intimate discoveries through the real Japan, through the seasons of a country traditional yet modern, and rich in scenic beauty and cultural heritage.