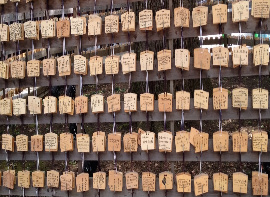 Here I was in Tokyo, the most fabulous city in the world. The summer heat finally abated and it was a delight to explore a few favorite spots and some new ones as well. If you seek a peaceful and spiritual walk in the middle of a big city, there is no better place than Meiji Jingu, a 77-acre oasis assembled in the middle of Tokyo to commemorate Emperor Meiji and Empress Shoken. Listening to the crackling of stones as I step by step approached the shrine was music to my ears. Seeing the colorful Ema or tablets used for wishes is always beautiful to see hanging together as I approached the most sacred part of the shrine.

What always strikes me the most about Tokyo is the juxtaposition of the old, contemporary and the sacred. Just around the corner from Meiji Jingu are Harajuku and Takeshita Street, housing a funky youth culture and an array of shops. This leads on to the fashionable Aoyama area, created to replicate the ‘Champs Elysee’. You can’t imagine three more different worlds existing within sight of one another.

After lunching in an architecturally stunning building eating traditional Japanese food, I made my way to Nezu Museum to enjoy their incredible gardens, rich with dozens of stone lanterns and teahouses. As the sky darkened and the onset of Tokyo’s twinkling lights approached, I ventured onward to Tokyo Skytree, a recently opened 634 meter tower and architectural phenomenon in this already technology savvy city. As the tallest broadcasting tower in the world, it boasts amazing 360-degree views of this metropolis. Best to see in the evening, I think.

To round out another eclectic day in Tokyo, I sought out an old favorite of mine, Bourbon Street, a small Cajun-style four-table eatery tucked away in the back streets of the Roppongi area. Fantastic food and conversation was enjoyed with its owner of 14 years. Speaking to a musician at the bar, it was recommended to visit several newer music establishments including The Cotton Club and Billboard Live. For next time, but who might have guessed that’s where Kool and the Gang were that night?

A terrific ending to a perfect day.